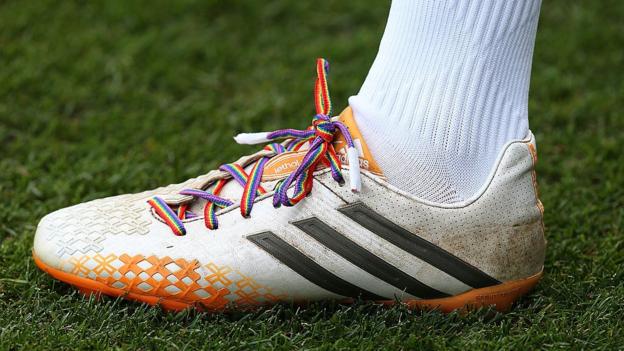 Football and rugby will join together this weekend to support a campaign helping to raise awareness of issues faced by lesbian, gay, bisexual and transgender (LGBT) fans and players.

Top-level rugby matches in England and Wales will also support the campaign.

Wembley Arch will be lit up in rainbow colours on Saturday.

“The Premier League is all about exciting, passionate and unpredictable football that is for everyone, everywhere,” Premier League executive chairman Richard Scudamore said.

“The Rainbow Laces campaign complements the work clubs are doing to promote inclusion and diversity in their stadiums, and across all levels of the sport.”

The Rainbow Laces campaign was launched by LGBT equality charity Stonewall in 2013.

Ian Ritchie, chief executive of the RFU, said: “The Rugby Football Union is proud to support Stonewall and the Rainbow Laces campaign.

“We believe rugby’s core values of respect, teamwork and sportsmanship resonate with what is at the heart of this important campaign.”