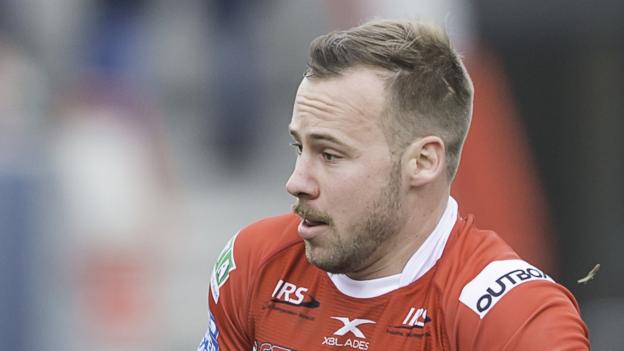 Darnell McIntosh opened the scoring for the visitors before Joel Tomkins put Rovers ahead with his first try since joining the club earlier in June.

Adam Quinlan and Junior Vaivai crossed over for the hosts either side of the break to extend their advantage.

Quinlan and Ryan Shaw touched down to open a formidable lead for Rovers before Aaron Murphy reduced the gap.

However their chances of a top-eight finish still look slim with four games left to play before the split.

Tomkins, on his home debut following his messy departure from Wigan, touched down to score his first points for the club.

The Giants, who made one change to the team that came back from 18-0 down to beat Catalans last time out, struggled to gain momentum against Rovers.

A classy showing for the hosts was capped off when Chris Atkin kicked a drop goal right as the full-time hooter was sounded.

“We’re all really happy to win and we’ll enjoy celebrating it. But the last thing we can afford to do is get carried away, because we know it’s out of our control whether we finish in the top eight or the middle eight.

“The way we kept the pressure on at the start of the game proved key. It meant it eventually took its toll on Huddersfield and that’s when we struck.

“We were also able to back it up by having a bench which was a lot stronger – which was down to the fact we’ve got players coming back from injury – and that gave us a lot more options.

“All we can do is make sure we build on this result and take one game at a time and see where that gets us at the end of the regular season. All I can say is that we’ve still got a lot of work ahead of us.”

“We were well off the pace and Hull KR were just too good for us. We ended up wasting far too much energy.

“After the way we’ve been going over the past few months, we were hopeful of getting the two points.

“But we just turned the ball over too cheaply on too many occasions.

“For us to be successful, we need everyone out there to turn up and give it their best. We didn’t see that on this occasion.”