PITTSURGH — The tension ballooned over months, until it eventually popped Wednesday at Pittsburgh Steelers headquarters. Le’Veon Bell stayed home another day. His agent teased a lengthy stay there. The Steelers told Bell’s agent he can call them. And players were livid as they walked from the hot practice field to a hotter locker room.

• Steelers teammates: It’s Le’Veon over us
• Big Ben: We’re more than just one guy
• Agent: Concern for taking away ‘future years’
• How will Bell do in free agency?

Yet no one is getting the end result they want. Bell isn’t getting more money, and the team is short an All-Pro.

Lots to unpack here. Let’s get right to it.

What does it mean each week he holds out?

Bell loses an $853,000 check for one week’s work, or 1/17th of the $14.5 million tender he has yet to sign. The Steelers keep that cash and salary cap space. And Bell gets one week closer to free agency, which is his ultimate goal here.

What’s the latest Bell can report?

Bell can miss 10 games and still get an accrued NFL season, which sets him free after the season. Article 8, Section 1 of the collective bargaining agreement states a player earns the season if he’s “full pay status for a total of six or more regular season games.”

The Steelers have a Week 7 bye, making Week 12 his safety net. He could always utilize that bye for some extra practice. As if Bell needed more time away from the Steelers after missing eight months, he’s got another one to two months to get into game shape.

Why is Bell doing this?

To get to March and cash in. Agent Adisa Bakari said on ESPN’s NFL Live that Bell plans to preserve long-term health. Bell told ESPN in January he wasn’t accepting another 400 touches on a salary he felt was below his value. He wasn’t kidding. Bell most likely found motivation from mega deals signed by Todd Gurley, Aaron Donald and Khalil Mack — all of which came after Bell’s failed franchise tag negotiations in mid-July. Bell feels he’s a top-10 player, a feeling many top 100 rankings organized by media outlets have validated.

He’s literally giving up nearly a million a week to find out how much that top-10 status is worth.

What options do the Steelers have from a business standpoint?

The Steelers can rescind the tag and send Bell gleefully into free agency, but I’m told they definitely aren’t planning that. That gives Bell what he wants, plus they keep the control by maintaining the tag. They want that compensatory pick in 2019 when they lose him. It will be a good pick, possibly a third-rounder. If they give up his rights prematurely, he’s gone for nothing.

Can the Steelers just trade him?

Sort of, but it would be a clumsy process and not something the Steelers want to do unless forced. Several league sources say a trade for Bell wouldn’t work for two primary reasons: His volatile position, and the challenge of the franchise tag. A team couldn’t negotiate a new deal with him now. It would have to wait for Bell to play out his tag, then re-up after the season. A lot can happen to Bell’s overall value and bottom line during that time, and a team most likely wouldn’t give up top picks for that uncertainty, especially for a running back, despite Bell’s greatness.

Has this happened before?

Yes, but not in the modern NFL era Bell navigates. In 2002, Seahawks offensive tackle Walter Jones waited until Sept. 16 to sign his one-year tender, missing the entire preseason and two games.

A run of five franchise-tagged linemen made their respective teams sweat from 1993-2000, including Cardinals defensive end Simeon Rice, who missed the 2000 season opener before signing a one-year, $4.2 million tender.

Jason Pierre-Paul was franchise-tagged in 2015 but didn’t sign an incentive-laden deal until Oct. 28 because of his July 4 fireworks accident. No player wants to follow that blueprint. 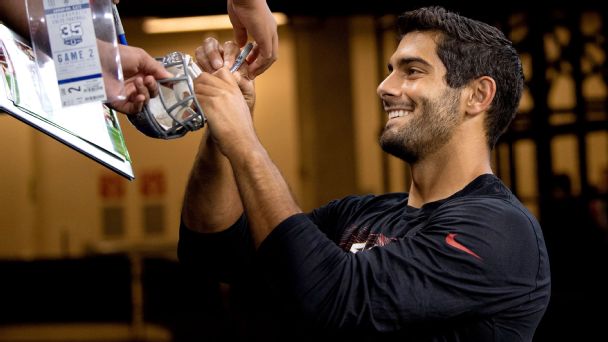 Why is the team really frustrated, beyond the obvious?

Because they felt Bell should have told them of his plans awhile ago. That’s the stance of several Steelers players, with center Maurkice Pouncey saying Bell played “peak-a-boo” with his intentions.

The Steelers believe they are in a championship window led by Killer B’s Ben Roethlisberger, Antonio Brown and Bell. Not only does Bell’s absence jeopardize those plans, but throughout the preseason the team had counted on him being there Week 1.

Bell might have had his business reasons not to tell players. But even the staunchest player advocate couldn’t have been surprised by locker-room backlash.

“At some point it is like, if you don’t want to be here, it is what it is and hold out for 10 weeks — it is totally fine with us,” Pouncey said. “But now when it’s game time and you have $14 million looming out there and you still not here and your team really wants you here? At this point we’ve got [backup running back James] Conner.”

How will his teammates accept him upon his arrival?

They won’t turn down an All-Pro, especially if the running game struggles. Pouncey said he’ll simply ask Bell if he’s ready to play when he sees him. But once your offensive line turns on you, that’s a hard recovery inside the locker room.

“Say if we’re rolling — do we just pull [James] Conner or [Stevan] Ridley or whoever else is out?” guard Ramon Foster said. “That’s a decision that’s gotta be made. And it might be right up his alley to where he says, ‘Well, hell, I don’t have to play; I’ll go into free agency.’ So I get it; I understand it — get your money. But, I dunno, at least let us know, I guess.”