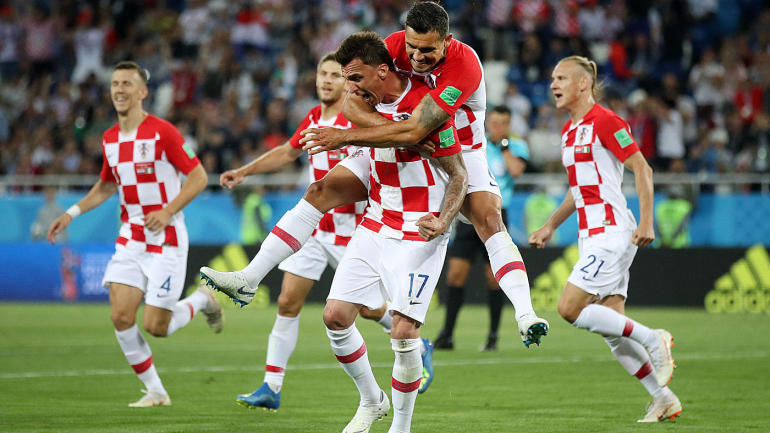 Sumpter is an applied mathematician who wrote “Soccermatics” — the book that shows how math works inside the game. Together with experienced analysts, Sumpter developed the powerful Soccerbot model.

The Soccerbot reads current odds and all team performance data, calculates key metrics and predicts upcoming matches. In the two-and-a-half seasons since it was born, the Soccerbot is up 1,800 percent on bookmakers’ closing odds. That’s right — 1,800 percent!

Now, the Soccerbot, which analyzed every potential knockout matchup, has revealed its optimal bracket, including a 2018 World Cup champion.

One shocker: England, just the fourth-biggest Vegas favorite at 7-1, wins its quadrant and reaches the World Cup semifinals for the first time since 1990.

England racked up six points in the group stage. Harry Kane knocked in a dramatic goal during stoppage time for a heart-pounding victory over Tunisia. Then, the English striker had a hat trick in the country’s 6-1 demolition of Panama.

Another shocker: Croatia, a 12-1 favorite to win it all, doesn’t advance past the quarterfinals. Croatia was just one of three teams to win all three games in the group stage. Croatia scored seven goals en route to wins over Argentina, Nigeria and Iceland.

Despite Croatia’s form entering the 2018 World Cup knockout stage, the model says it won’t reach the semifinals. Croatia is a team to avoid when filling out your 2018 FIFA World Cup bracket.

Sumpter’s optimal bracket has also identified another surprising upset in the knockout stage that could wreck brackets. Nailing this pick could be the key to winning your World Cup bracket challenge.

So what is the optimal bracket for the World Cup Challenge? Visit SportsLine now to see which teams you should be all over in your World Cup brackets, and which upsets could be the key to victory, all from the model that’s returned an 1800 percent profit on bookmakers’ closing odds.

« Drew Doughty got his new deal; what happens next?
Crabbe makes donation to keep school open »