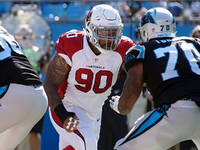 For the third time in four years, the Arizona Cardinals are getting precious little return on their first-round draft investment.

Defensive tackle Robert Nkemdiche, the team’s top draft pick in 2016, has been a healthy scratch the past two games after playing just 51 snaps in the first nine weeks of the season.

Asked if Nkemdiche’s situation is similar to that of Humphries a year ago, Arians used the opportunity to send a not-so-veiled message.

That might not seem like an emphatic statement, but consider the nickname Arians hung on Humphries last year: “Knee Deep.”

That’s how far coaches had to go into Humphries’ anatomy to motivate him.

Leading up to the 2016 NFL Draft, Nkemdiche’s talent, size and intelligence were unquestioned. He was red-flagged by many teams, though, due to concerns about maturity, instincts and motor.

“Nkemdiche is the biggest boom-or-bust prospect in the draft,” NFL Network analyst Bucky Brooks opined in late March. “If you can figure out what he is and what motivates him, you could uncover a star.”

The Cardinals have found unimagined success with 2015 All Pro Tyrann Mathieu, a prospect who was similarly red-flagged entering the 2013 draft. Whereas Mathieu quickly emerged as one of the most self-motivated players in the league, Nkemdiche has yet to reach his own gridiron epiphany.

Arians is fond of saying rookies should be ready to take on substantial roles by Thanksgiving. Wednesday’s comments are a tacit acknowledgment that Nkemdiche is far behind the typical first-year learning curve.

« England 'must be proactive' in third Test
Rainbow Laces: Football & rugby to support campaign over weekend »