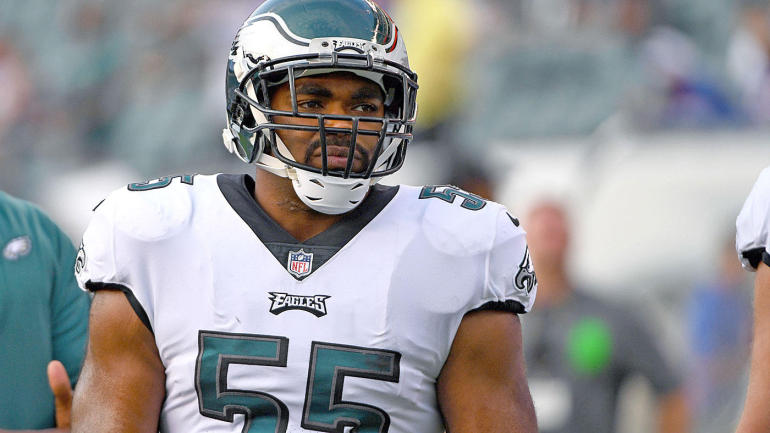 When the Philadelphia Eagles finally make their trip to the White House on June 5 to celebrate their Super Bowl win, not everyone is going to be there.

Over the past several months, multiple players — including Chris Long and Malcolm Jenkins — have made it clear that they have no interest in visiting the White House. One other player who might skip out on the trip is Super Bowl hero Brandon Graham, who made one of the biggest plays in Super Bowl LII when he strip-sacked Tom Brady late in the fourth quarter to help seal the Eagles’ 41-33 win over the Patriots.

During a radio interview in late April with 94-WIP in Philly, Graham said he was going to take a hard pass on making the trip to Washington.

“As of right now, I won’t be there,” Graham said of the White House visit, via PennLive.com. “I’m going to be just here enjoying, waiting on the ring ceremony. Can’t wait to look at the ring, and once we figure everything out, they’ll see what they’re going to do. But right now I haven’t talked to anybody about it. I’m going to relax and enjoy this ring ceremony, whenever that is. That’s what I’m more focused on right now.”

Apparently, Graham’s decision to skip out on the White House visit didn’t sit well with at least one fan, because a few weeks after the interview, some vulgar hate mail showed up in his locker and he decided to share it on Instagram.

The man who wrote the letter said he’s no longer an Eagles fan because he’s appalled by the actions of Graham and his “a–hole teammates.”

Since the letter above is kind of difficult to read, here’s exactly what it says:

I always felt you were an all right regular guy, who loved America, but you have clearly shown your intense hatred towards America!

I am appalled that you and a couple of your a–hole team-mates are turning down an offer made by President Trump to visit our nations White House, as the Super Bowl Football Champions.

If I owned the Eagles Football Team everyone one of you would have been fired and released immediately when you decided not to visit Washington.

To say I am totally disappointed in your decision is tremendously understated. And as a result I am no longer a fan of yours.

It would be great news, to me, to see you let go from the team.

You have my complete and utter contempt.

P.S. You have my permission to show this letter to your a–hole teammates — so they know how a long time Eagles fan feels about you miserable bastards.”

The fan might not approve of Graham’s decision, but Eagles coach Doug Peterson is on board with it. After the team’s OTA session on May 22, Pederson said he would let each player make their own choice about whether or not they want to attend the White House ceremony.

Pederson will definitely be making the trip.

“Excited to be going to be honored as world champions,” Pederson said. “I think it’s a great honor. We’re still working through logistics right now, so we don’t have all the details of the day, but excited to be going.”

Although Pederson is excited, it will be interesting to see how Eagles owner Jeffrey Lurie handles things. Lurie has made it pretty clear over the past few months that he’s not a fan of Trump. During the NFL owners meeting last October, Lurie took a shot at President Trump in a secret recording that was obtained by the New York Times. During the meeting, a player said that owners couldn’t be trusted because they side with Trump on the national anthem issue and Lurie responded by saying that Trump’s presidency has been “disastrous.”

“Many of us have no interest in supporting President Trump,” Lurie said. “Yes, there are some. There are some players who do, too. But this is not where you brandish a group of people because they own assets in a sport we love, supporting what many of us perceive as, you know, one [expletive] disastrous presidency.”

The Eagles have yet to announce which players will and won’t be at the White House for the trip.

« England's selection loophole 'still exists'
Smart on free agency: 'I want to be in Boston' »