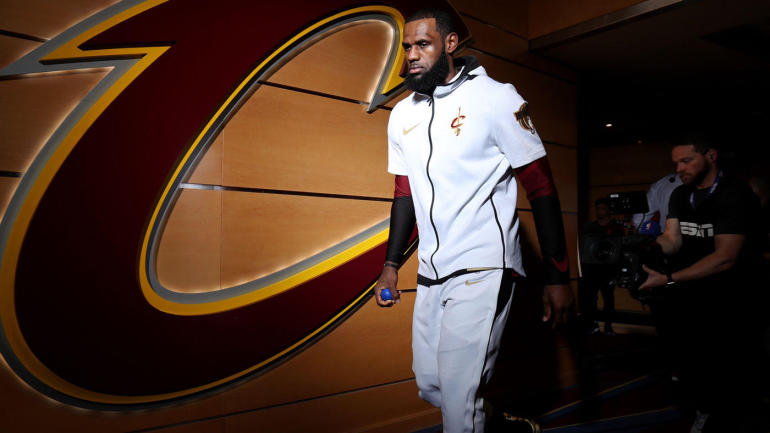 With the 2018 NBA free agency period set to begin at midnight, everybody is waiting for the first domino to fall and set things off. We already have stars being spotted flying into Los Angeles and rumors of which players are having meetings come midnight. With huge stars like LeBron James, Paul George and Kawhi Leonard involved, this promises to be one of the most exciting offseasons we’ve seen in a long time.

To keep all the rumors straight, we’ll continue to update this post with the latest information on signings, trades and negotiations. Happy NBA offseason!

LeBron James is either meeting with the Lakers, or he’s setting up his planned free agency meetings at his summer home in Los Angeles. James was spotted flying into LA by a group of fans and ESPN later reported that he was indeed on the plane. Are the Lakers getting first crack at James?

Report: LeBron not meeting with Cavs in person

LeBron James will not be having an in-person meeting with the Cavaliers to start free agency, according to ESPN. This doesn’t mean that James isn’t going to have a discussion of some kind later on with Cleveland officials, but as of now, there is no official face-to-face meeting scheduled.

There has never been much doubt that the Warriors would retain Kevin Durant this summer, but as for his long-term future with the team, that could be in doubt. According to multiple reports, Durant may only sign a “1+1” contract, essentially a one-year deal with a player option for next season that he would almost assuredly opt out of.

Jeff Green wasn’t the most impactful role player last season, but he had his moments for the Cavs. According to Joe Vardon of Cleveland.com, Cleveland has an interest in bringing Green back for another season. Of course, Green probably wants more money than the veteran’s minimum this time around.

Warriors will make run at DeAndre

Oh boy, here we go. Marc Stein of The New York Times reports that the Warriors will take a shot at DeAndre Jordan in free agency. Jordan would have to take a significant pay cut to join Golden State and management knows the chances are slim, but they’ll explore the opportunity nonetheless.

Immediately after DeAndre Jordan made his decision to opt out of his contract with the Clippers and become a free agent, the Mavericks and Dirk Nowitzki reportedly agreed not to exercise his $5 million team option for next season. Dirk and the Mavericks will renegotiate a new deal for 2018-19, which will be Nowitzki’s 21st NBA season.

The big man has been linked to the Mavericks but he won’t be heading to Dallas as part of a sign-and-trade as was speculated. Jordan decided to opt out of his option with the Clippers, according to a report from ESPN’s Adrian Wojnarowski and will become an unrestricted free agent, with the Mavericks expected to be one of his suitors.

LeBron James is now an unrestricted free agent. As expected, “The King” opted out of the final year of his deal with the Cavaliers, as reported by Cleveland.com’s Joe Vardon. This essentially eliminates the possibility of him going to the Rockets, and leaves the Cavs and Lakers as the two likely finalists. Also, he’s deliberating in “The Decision Cave.”

The Spurs reportedly aren’t interested in taking back Lonzo Ball from the Lakers in any potential Kawhi Leonard deal, according to Tim Bontemps of the Washington Post. The Lakers are reportedly trying to sweeten the pot by acquiring a draft pick from the Nuggets, which they would use in the Leonard trade. Full story (8:25 p.m. ET)

76ers putting together package for Kawhi

The 76ers are reportedly thinking about making a run at Kawhi Leonard, and are contemplating a package involving Robert Covington, Dario Saric and a first-round pick. Full story (5:28 p.m. ET)

Lakers willing to include Ingram in Kawhi deal

As the Lakers continue to pursue a trade for Kawhi Leonard, they’re reportedly willing to offer former No. 2 overall pick Brandon Ingram and a first-round pick to get the deal done. Full story (3:30 p.m. ET)

The Kings have plenty of cap room, and K.C. Johnson of the Chicago Tribune reports that they may use it to go after Bulls restricted free agent guard Zach LaVine. LaVine was part of the deal that sent Jimmy Butler to Minnesota, but was limited last season after recovering from an ACL injury. (1:24 p.m. ET)

Enes Kanter leaning toward opting in

According to ESPN’s Ian Begley, Knicks big man Enes Kanter is reportedly leaning heavily toward opting into his $18.6 million option for next season. (12:37 p.m. ET)

The Spurs are reportedly ready to trade Kawhi Leonard, and have reportedly engaged in talks with both the Lakers and Celtics about packages involving young players and picks. Full story (12:08 p.m. ET)

Pacers could go after Aaron Gordon

The Pacers have more than $20 million in salary cap space this offseason, and according to ESPN’s Adrian Wojnarowski they may use it on an offer sheet for Orlando Magic restricted free agent Aaron Gordon. (11:20 a.m. ET)