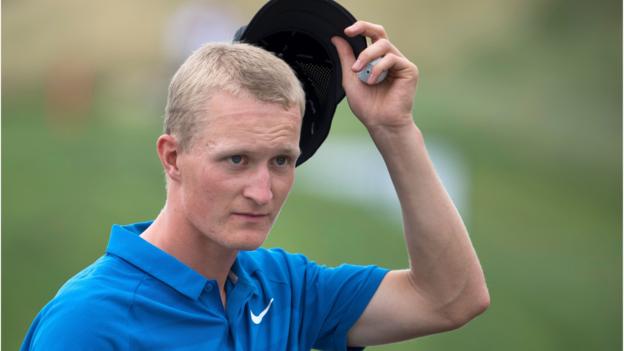 Sweden’s Marcus Kinhult leads at the halfway stage of the French Open at Le Golf National, the venue for this year’s Ryder Cup.

The 21-year-old’s six-under-par round of 65 gave him a two-shot advantage over England’s Chris Wood.

Wood, who represented Europe at the 2016 Ryder Cup, made three birdies on his front nine as he carded a 68.

The windy conditions and punishing rough is making it a tough test for the field, with defending champion Tommy Fleetwood among those to miss the cut.

But Kinhult has been solid and even when he made bogeys on the 13th and 17th, on each occasion he birdied the next hole to regain the dropped shot.

The world number 183 has yet to win on the European Tour, with his most significant finish a 12th place in this year’s BMW Championship.

“It feels good, it feels really good,” he said. “I got off to a great start and played well from there. The wind picked up a little bit on the back nine, the last four or five holes or so, but happy overall.

“Saturday is going to be a big day and hopefully Sunday as well. It’s a position I have never been in before so we’ll see.”

Golf in France and the 2018 Ryder Cup

Wallace wins Made in Denmark after four-way play-off